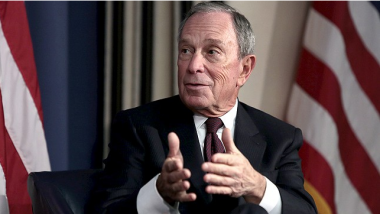 Former New York City Mayor Michael Bloomberg slammed the legalization of pot during a trip to Colorado this weekend, calling it "one of the stupider things" happening in the United States.  The socially liberal former mayor, who has admitted to consuming marijuana decades ago, argued that states that move to legalize the plant for recreational and medical purposes are risking children's intelligence.  "What are we going to say in 10 years when we see all these kids whose IQs are five and 10 points lower than they would have been?” Bloomberg said Friday night at the Aspen Institute, according to The Aspen Times. “I couldn’t feel more strongly about it," Bloomberg added. "This is one of the stupider things that’s happening across our country.”  Bloomberg, 72, said that marijuana is different from alcohol, and argued that today's strains of the drug are more potent and potentially more dangerous than those from the 1960s when he smoked a joint, according to reports from The Associated Press and Aspen Daily News.  Another left-leaning political figure, Colorado Gov. John Hickenlooper (D), has said he thought the state's legalization was a bad idea. Colorado and Washington state voters in 2012 were the first in the nation to legalize recreational pot for adults 21 and older, joined in November by voters in Alaska and Oregon. Congress has so far blocked the decision by Washington, D.C., voters to legalize the drug for recreational purposes. Twenty-three states and the District of Columbia allow marijuana use for medical purposes, which Bloomberg has also criticized. In 2013, Bloomberg described medical marijuana as "one of the greatest hoaxes of all time."