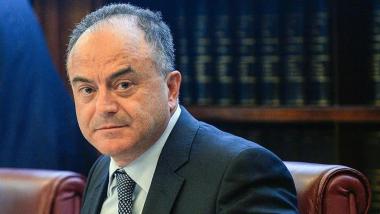 A prosecutor takes hundreds of mobsters to court.

The airport at Lamezia Terme, Calabria, in the toe of Italy’s boot, was built in the 1970s and has not aged well. The cement facade is punctuated by rows of round windows that resemble oversize portholes. The parking lot is poorly paved. Beyond it rises an unfinished concrete tower, open to the elements and covered on one side by an advertisement for amaro.

I was there one day last year to meet Nicola Gratteri, the chief prosecutor for nearby Catanzaro, a small city high in the hills of central Calabria. Gratteri has dedicated the past three decades of his life to fighting a Calabria-based organization known as the ’Ndrangheta—the richest, most powerful, and most secretive criminal group in Italy today. (Pronounced en-drahn-get-ta, the word essentially means “man of honor”; it is believed to be derived from the Greek andragathía, or “heroism.”)

Sicily’s Cosa Nostra has been romanticized by the Godfather movies. The Neapolitan Camorra has become widely known through the film and TV series Gomorrah. But the ’Ndrangheta, the least telegenic and most publicity-shy of Italy’s Mafias, is the most aggressive.

The ’Ndrangheta’s tentacles extend to Italy’s wealthy north, where the organization thrives on skimming off state contracts, especially in construction, and to 31 other countries worldwide—to much of Europe, to the United States and Canada, to Colombia, to Australia. Outside Italy, the city with the most ’Ndrangheta outposts is Toronto. The ’Ndrangheta is on excellent terms with criminal affiliates in Latin America, from which it imports vast amounts of cocaine. The group is said to control more than half the cocaine market in Europe. And it has not wasted the opportunities created by the COVID-19 pandemic. Tens of thousands of small businesses throughout Italy suddenly found themselves on the ropes, without revenue or access to credit. For some, the ’Ndrangheta and other criminal groups stepped in with assistance. They also provided envelopes of cash for the unemployed. Call it an investment. As the Financial Times reported, the organization has also skimmed off public-health funds in Calabria, with disastrous consequences for the region’s health-care system.

Gratteri’s focus on the group has been unwavering. He helped mastermind a 2014 sting operation, code-named “New Bridge,” in which the FBI and Italian agents disrupted a major ’Ndrangheta drug ring operating on three continents. Authorities seized 1,000 pounds of pure cocaine. In December 2019, in a move coordinated by Gratteri, Italian police rounded up 334 people—lawyers, businesspeople, accountants, a police chief, the president of the Calabrian mayors’ association, and a former member of the Italian Parliament—on charges related to ’Ndrangheta activity, including murder and extortion. The formal legal process against these individuals and others—more than 470 people all told—is under way. A “maxi-trial” will eventually move from Rome to a large courthouse being prepared for the occasion in Calabria in order to accommodate all the defendants and their lawyers.

I was standing outside the airport when Gratteri sped up in a station wagon, trailed by an escort of plainclothes officers. They wore jeans and sneakers, and carried leather bags that I assumed held guns. Gratteri got out of the car and walked quickly toward me, taking hold of my suitcase and handing it to one of the officers. As we drove off, I asked him if this was an armored car—the door had seemed unusually heavy. With a flicker of a smile, he said, “Yes, of course.” After the arrests in December, the government provided him with an even more heavily armored vehicle than the one he had been using. A lot of people want Nicola Gratteri dead.

Gratteri was born in 1958 in the small Calabrian town of Gerace, not far from areas saturated, then and now, with ’Ndranghetisti. He was the third of five children. His father, who had a fifth-grade education, ran a small grocery store; his mother, who had a third-grade education, cared for the home and family. As a boy, Gratteri was well aware that something was deeply wrong with his corner of the world. Once, hitchhiking to school, he passed a dead body lying by the road.

Gratteri is slight, with inscrutable eyes, and he sometimes shuffles when he walks. On the highway, he drove extremely fast—even in the long, dark tunnels that poke through the Calabrian hills; even on roads that suddenly narrowed from four lanes to two. We were heading for Rome, 360 miles to the north, where he had a round of meetings. He could have flown, but he loves to drive; he says it gives him a rare sense of freedom. And the drive offered a good opportunity to talk. I told Gratteri that I imagined he knew which ’Ndrangheta or Camorra clan ran every stretch of roadway along our route, and he gave a little nod.

In another conversation, he told me he was lucky to have grown up in a family per bene—a good family, one with sound values.

We had antibodies,” Gratteri went on. Others didn’t. “In front of the school, I used to see the children of the ’Ndranghetisti, and they were already acting like little ’Ndranghetisti, and I couldn’t accept that violence. And so I thought, When I grow up, I have to change things.”

He went to university in Catania, Sicily, and after graduating, he took the difficult state exam to become a magistrate, a job he began in 1986.

In the prosecutors’ office in Locri, Calabria, he began reopening cases that had long been stalled. In 1989, he started looking into the murder of a local businessman, who had been killed after a private dinner also attended by several politicians.

This businessman was building a dam for a lake. But there was no water in the lake. So I thought, Let me see if there was a public bid. And there wasn’t one.” Gratteri concluded that the businessman had somehow fallen out of favor with the local bosses.

Soon after Gratteri discovered the contract for the nonexistent dam on the waterless lake, someone shot at the window of his girlfriend’s house. She married him anyway. For obvious reasons, Gratteri is reluctant to discuss details about his family, and for their safety he does not speak with them about his work. The family, like Gratteri himself, is under police protection.

In 1992, two anti-Mafia prosecutors in Palermo, Sicily—Giovanni Falcone and Paolo Borsellino—were killed in car bombings within weeks of each other, along with members of their police escorts and Falcone’s wife. The attacks were among the most dramatic and terrifying in Italy’s postwar history. Falcone and Borsellino had presided over a celebrated maxi-trial, beginning in 1986. Images of the 366 defendants crowded into cages in the courtroom became famous everywhere. Hundreds of mafiosi were convicted. After the assassinations, a black-and-white photograph of Borsellino and Falcone sharing a confidential exchange became the emblem of Italy’s fight against corruption—it has appeared on posters, on billboards, on the sides of buildings, and all over the internet.

I asked Gratteri how the assassinations had changed his sense of the situation in Italy. He told me that the Cosa Nostra had made a grave error: The assassinations revealed that the organization’s influence “was much bigger and much deeper” than anyone had thought—an existential challenge to the state. Troops were sent to Sicily. As Gratteri sees it, the group’s strategy of full-frontal war against the state marked “the beginning of the end of that Cosa Nostra” and the start of a new Cosa Nostra: quieter, and more interested in infiltrating institutions than in murdering prosecutors and judges.

The ’Ndrangheta, too, learned a lesson. It became slyer, and never sought to directly confront the authorities.

It always looks for points of contact and common ground with people and institutions,” Gratteri told me.

That is what gives it its power. The group is woven into the fabric of the Italian economy and Italian political life. Throughout the Italian south, it is not uncommon for candidates seeking national office to demonstrate an inconspicuous familiarity with voto di scambio—the “exchange vote,” or quid pro quo. That is widely interpreted to mean cutting deals with criminals so that they encourage people to vote for the right candidate. And it is not just in the south: As far north as the Italian Riviera, entire cities have seen their governing councils disbanded because of ’Ndrangheta infiltration. (The disbanding of local councils, with governance put into state receivership, is a standard response.)

Author: RACHEL DONADIO - a Paris-based contributing writer at The Atlantic, covering politics and culture across Europe.