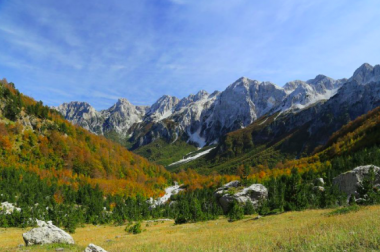 Around 10,000 people have lost their lives to blood feuds in Albania since the fall of Communism. These are not crimes related to gangs or drugs, but rather to a centuries-old tradition that has wreaked havoc through communities for over 500 years.

Blood feuds are present in many cultures- in southern Italy, Corsica, Sardinia, Ireland, Greece, Spain, the Netherlands, Turkey, and Berbers but the Gjakmarrja is something deeper and more devastating.

The concept of Albanian blood feuds came from societal rules contained in various Kanuns, most notably the “Kanuni i Leke Dukagjinit”. Created some 500 years ago and passed orally down the generations before being written more recently, these ‘laws’ governed every section of society. They covered marriage, inheritance, the organisation of the home and family, and most important to Albanians- honour.

The idea of honour is one of the most important in Albanian culture, even today. To be honourable and to keep one’s honour intact is considered by some to be even more important than the life of another, even family members. To violate someone’s honour or to do something dishonourable results in becoming a social outcast and even facing death.

Some of the actions that can initiate gjakmarrja include killing a guest, violation of private property failure to pay a debt, kidnapping, seduction of a woman, or rape.  It can also be triggered by murder. Once the action has occurred, the ‘wronged family’ will seek out a member of the other family to kill to settle the wrongdoing. But of course, it does not end there. The cycle of revenge can continue and families are living in the North of Albania that have been locked in blood feuds for generations.

The only time, when blood feuds ceased, was during the time of communist dictator Enver Hoxha. Following his death and the end of the regime, they came back with a vengeance.

I recently interviewed Dr Elona Prroj, a woman who has not only experienced blood feuds first hand but who has completed a PhD in their history and meaning. She explains that often, the killing will not be targeted at the one who has directly wronged the other family. Rather, they will seek to kill a member of the family who they believe will cause the maximum hurt and pain. To me, this demonstrates that these killings are far more than just an eye for an eye. They are cold, calculated, and torturous.

Once a family is involved in a blood feud, all of the male members of the family are at risk. The rules of the Kanun state that women, children and priests are excused from the feud and should not be killed. This does not mean that the rules are always followed. Sadly there are many cases where women and children have been killed. Elona explained to me one case where a priest was killed as well, but this man was also her husband.

Living in Shkodra, Elona became aware of blood feuds and some 3000 families that live with this curse over their heads. She watched from afar and helped when she could, never imagining that it was something that could touch her.

One day, the uncle of her husband Dritan killed another man following an argument. At that moment, 25 male members of her family were sentenced to remain inside their homes to avoid retaliation killings. They soon discovered that her husband, despite being a priest, was the target of the other family.

After five long years inside, Dritan and Elona decided to go and live in England to get away from the constant fear of death that enveloped them. But after a matter of a few months, Dritan said that he wanted to return back to Albania. As a man of God, he believed in the path that God had chosen for him and he did not want to remain in the UK, in fear.

So, they returned to Albania. Elona was fearful for her husband’s life but she also knew she couldn’t stand in the way of his plan. She believed that no one would kill him if their wife was present and so she followed him everywhere, hoping that her being there would save him.

Some months later, Dritan met with his brother to discuss the situation. He told him that if he was to be killed, no one in their family should seek revenge and that the feud should die with him. His brother agreed.

Two weeks later, as he was arriving at his church, a man shot him and killed him. The feud did not continue and it was almost as if Britain had sacrificed himself for the freedom and lives of the two families involved.

Ten years later and Elona has set up an NGO “No to blood feuds, yes to life” that helps families living with these problems. She explained that thousands of people are living with this risk, much more than the government will admit.

The reason for government denial is simple-if they admit the size of the issue with blood feuds, it gives more weight to those seeking asylum abroad. The EU has said that lowering the asylum rate is essential if Albania wants to join the EU. Therefore, the numbers of blood feuds are downplayed and deaths are blamed on drugs and organised crime.

Another reason why these crimes persist is because of the weak justice system. Those who are wronged have no faith in the police or judiciary so resort to these means too right their wrongs. But even the police are not interested in getting involved. Despite blood feud murders carrying a sentence of 35 years, Elona explained that this law has never been used.

Despite this, she is optimistic about the future. Through outreach work, education, mediation, empowerment, and helping to lift people out of poverty, she thinks things will change. But one thing is clear, this is not a job for just activists and scholars, it needs the government to acknowledge the problem and to put in place concrete policies and strategies to combat it.